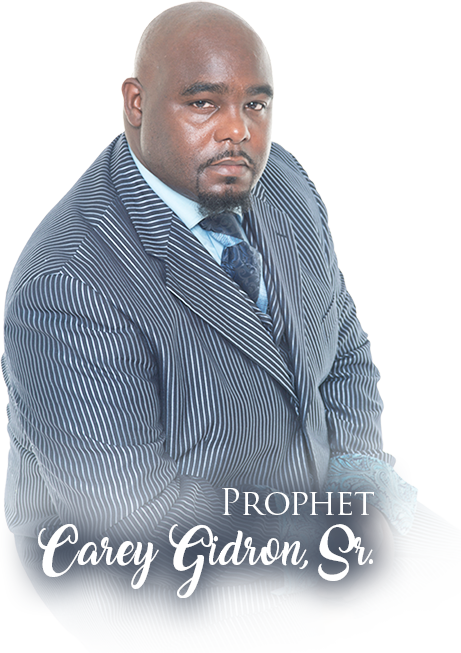 Prophet C. L. Gidron, Sr. is a 21st Century Mover and Shaker who is committed to making global impact for the Kingdom of God. A native of Chicago IL, He has proclaimed the word of the Lord for 0ver 26 years and has touched several nations around the world. Prophet Gidron has served as a social advocate for the educational, political and cultural climates of the city of Chicago. He is an entrepreneur, and is in demand for conferences, crusades and leadership gatherings. He fulfills his Prophetic calling as the founder and overseer of The Warehouse Family Christian Center C.O.G.I.C. in Chicago Heights, IL. A relevant leader, he has determined to use his energies to both challenge and empower a generation of leaders, Born for such a time as this, the message in his mouth transcends social, racial and denominational barriers. His primary passion is to see the awakening of a people poised to do the impossible in our world by bringing transformational change in their lives for the Glory of God.

Prophet C. L. Gidron, Sr. has been called by God to evoke his church to walk in the likeness of God and Image of Christ. He is a refreshing Prophetic voice of wisdom for the nation; he produces sobriety and biblical integrity. He is a gifted leader whose message touches the whole spectrum of Christendom and life. God has sent him to raise up the modern souls of our society that’s been locked out by religious traditions and legalistic superstitions. His gifting is both apostolic and Prophetic. His cutting edge word brings people from all walks of life into both the raw love of God and a hunger to walk in uncompromising devotion to his purposes. He has had the opportunity to travel the nation sharing the grace of God that’s been forwarded to his ministry. As a counselor and spiritual Father he pours his life into leaders as they pull from the revelation of Gods words and ways like never before.